Kermit K. Murray is the Roy Paul Daniels Professor of Chemistry at Louisiana State University. He obtained his B.S. degree in Chemistry with high honors at the University of California, Berkeley, in 1982 and was the Chemistry valedictorian. He received his Ph.D. in Chemical Physics at the University of Colorado in 1988, working with Professor W. Carl Lineberger on the chemistry and spectroscopy of negative ions. He went on to postdoctoral research on infrared spectroscopy at Rice University with Professor Robert F. Curl and at Texas A&M University with Professor David H. Russell, where he developed novel spray ionization methods for MALDI mass spectrometry. In 1994, he became an assistant professor at Emory University before moving to Louisiana State University in 2001. His research focuses on instrument development for mass spectrometry using lasers for sampling and imaging of complex biological samples.

Can you tell us more about yourself and your research?

Murray Group research is aimed at mass spectrometry instrument development and applications of new techniques centered on laser ablation, ionization, and photochemistry. We use laser methods for biomolecule imaging by mass spectrometry, laser ablation sampling, and laser-initiated photochemistry. Instrumentation goals are to achieve spatially resolved quantification and identification of biomolecules in tissue and achieving spatial resolution at the level of single cells. The work has an underlying goal of achieving a fundamental understanding of laser ablation and ionization processes and through that understanding to improving performance and expanding the applications of mass spectrometry and laser ablation sampling.

I have been using mid-infrared lasers in mass spectrometry for the past 25 years for ionization and more recently for laser ablation sampling. The laser is tuned to the OH stretch vibrational frequency that is efficiently absorbed by water and other compounds in tissue. The ablated material can be captured in a number of ways, for example on a filter for off-line or into a flowing or sprayed liquid for on-line mass spectrometry. Since the sampling and ionization are decoupled, the approach is compatible with nearly any ionization method and, most importantly, additional separation and other manipulation steps can be accomplished between sampling and analysis.

How has the Opotek Laser been helpful in your research?

I started a collaboration with OPOTEK in 2000 when we received STTR funding from NIH to develop a small mid-IR OPO. At the time, the main option for the mid-IR was a large Nd:YAG pumped OPO that took up most of a 4×8 laser table. Our goal was to reduce the size but maintain the tunability that we have found to be useful for mass spectrometry and laser ablation applications. The result of the Phase I and II STTR was a small OPO that eventually led to the OPOLETTE 2731. The student who worked on that project as part of his doctoral thesis, Mark Little, went on to take a position as marketing and sales manager at OPOTEK after he graduated. I currently have four OPOTEK lasers that support three federally funded projects. We are using our infrared lasers to ablate and capture biomolecules from tissue for protein and DNA sequencing and we are using an OPOLETTE 355 LD for atomic force microscope tip-enhanced laser ablation. 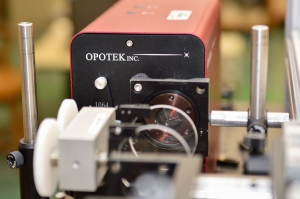 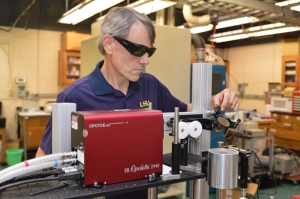 Opotek at Laser World of Photonics 2019 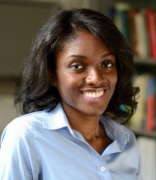